Laura Bridgeman, author, on a painting by her mother. GB Tell me why you chose this. LB I had a few things I could have taken pictures of – my […] 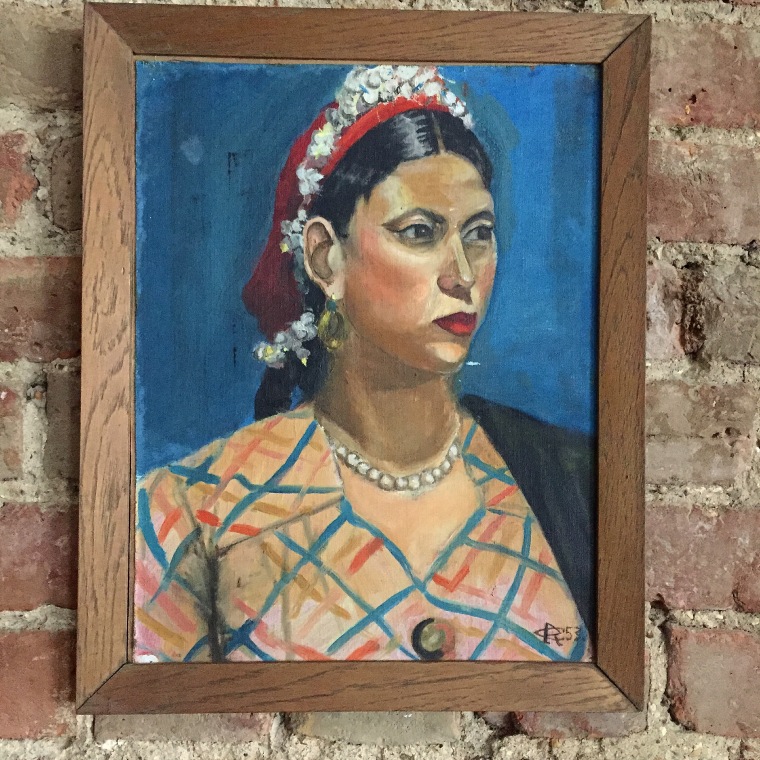 Laura Bridgeman, author, on a painting by her mother.

GB Tell me why you chose this.

LB I had a few things I could have taken pictures of – my Gentleman’s glass-fronted wardrobe, my old Smith Premier typewriter.

But I thought this was more original. It IS original. And it also has an added beauty for me now, or an added poignancy, since

Mum no longer paints. This never hung in Mum’s apartment, but I brought it back to mine several years ago.

People often think that it’s either by Frida Kahlo or it is Frida Kahlo, and this makes it a conversation point.

GB Why was your mother in Egypt? Is that somewhere she felt at home?

LB My mother was born in Egypt in 1936. Cairo. Now, with the Alzheimer’s, she often refers back to her early years.

This is very accessible for her. She still speaks some Arabic and French – which was the first language she used at school.

My maternal grandmother was Jewish, but my mother was born and raised in Egypt, because my grandfather was in the Army.

He served in Syria, and oversaw the building of a bridge in Raqqa, which was destroyed in the airstrikes,.

Sometimes, I see that part of the world, as metaphor for Mum’s decline.

GB Do you think you’d find it beautiful if a stranger had painted it?

LB An interesting question. Possibly not.  I don’t really focus on paintings. I’m more obsessed with language than image.

I do like the colours and the proportions; Mum was 17 when she painted it.

I think this is remarkable within itself. Also, my grandfather might have made the frame.

He made a lot of things out of wood – a drink’s cabinet, a desk. I have these things at home too.

GB Do you think there’s a genetic element to what we find beautiful, that goes beyond upbringing?

LB No. I don’t think its genetic. I think it’s a mix of ability and development. My step-son is an artist. That was always in him. From an early age.

Mum always painted and drew. I can’t, although my brother, also has this ability.

Nature / Nurture is a huge debate. People use it for writing also. Basically, when I teach writing in universities, prisons, or anywhere, I realise I can only teach people technique.

Ability is innate. You can’t give anyone that. I think you can inspire though and create an awareness.

But imagination, creative flair, you either have it or you don’t.

GB You say that your mother taught you a lot about beauty. What has stuck and where do you differ?

LB Mum exposed us to a lot as a family. Because of her being raised abroad, me and my two brothers ate things like artichokes and asparagus, in the 70’s when no one else was.

Mum always made things – lampshades and curtains. She made me clothes as well – dresses and skirts that I loathed wearing.

Mum opened us up to a sensuality of the world.

She was always challenging our tastes and our sights and our sounds.

She was profoundly stimulating in this regard.

My father was very traditional by comparison. English. And also as a Naval man. He wasn’t fussed about art or literature or food.

So they were ill-matched.

But Mum’s tastes were always more overtly feminine than mine. Fussy. I have a feel for straight lines, uncluttered language, Brutalist architecture, tailored clothes.

I enjoy flowery ties and bright shirts, but essentially, I have a masculine aesthetic.

I think if I was a boy, Mum would have loved my styling, but she wanted me to conform.

Mum always admired her friends that were small or pretty.

Because I was her only girl, she regretted me being tomboy.

GB Your mother was clearly surrounded by beautiful objects in her apartment. Does she still appreciate beauty in simple objects?

LB Yes. In the weather and nature. And she often challenges the Nursing Home and tells them the place needs a lick of paint, or the garden needs work.

I don’t think you ever lose your eye. Or your ear. Mum will question me about words I use, when I called her, “Hon” she told me it sounded German.

When I wore a rust-coloured jumper, she also admired that.

The senses get more developed with Alzheimer’s. But they are in the here and now.

Mum will never remember or retain these moments.

GB There are a lot of studies about painting as therapy for Alzheimer’s patients. Did this ever apply to your mother? You say that she doesn’t paint now?

LB Now Mum can’t even hold a brush. I cover this in How Was The Party? A friend wanted her to paint her house in France from a photograph.

It’s not possible. Then the same friend gave her a colouring in book – The Enchanted Forest, An Inky Quest Colouring Book.

Last time I visited Mum, she’d pushed the book under the bed.

GB You say that you look at this painting every day. Do you mean that you just see it every day – or do you stop and think about it? What goes through your mind? Does your appreciation of the painting change as your mother’s condition or your own state of mind regarding your mother changes?

LB I see it in my apartment. Sometimes, I look at it. Other times, I walk past it.

Sometimes, I think it’s incredible Mum did that. I think about the fugue of youth.

Of promise. Of ability. Alzheimer’s strips all of this. It’s so demoralising as an illness.

Everything somebody was, goes. But the person still remains.

My brothers both have mental health problems. My eldest brother was Schizophrenic and he committed suicide in 1997.

I suddenly have a huge desire to hold onto everything Mum made – including us.

I have all the family photos and the babies’ clothes, and now I have the Power of her Attorney.

How Was The Party? is also part of this desire.

GB What makes something worthy of the word Beauty to you?

LB It’s a taste thing. I always look for something unusual.

A tension – in art, or language, or looks.

I’m drawn to the unconventional; something that disturbs me.

I find beauty in things that have a longuer, a depth, an intensity.

I want to work for something. I want to be challenged.

I’m attracted to women that are striking, not traditionally pretty.

I’m always drawn to profiles, large noses – these are apparent in my partners and my mother.

The Greeks defined beauty as terror – we quiver before it.

This site uses Akismet to reduce spam. Learn how your comment data is processed.