In celebration of Yayoi Kusama opening her own museum in Tokyo, here’s an interview we did with her in 2013. You travelled alone to New York in 1957. It was […] 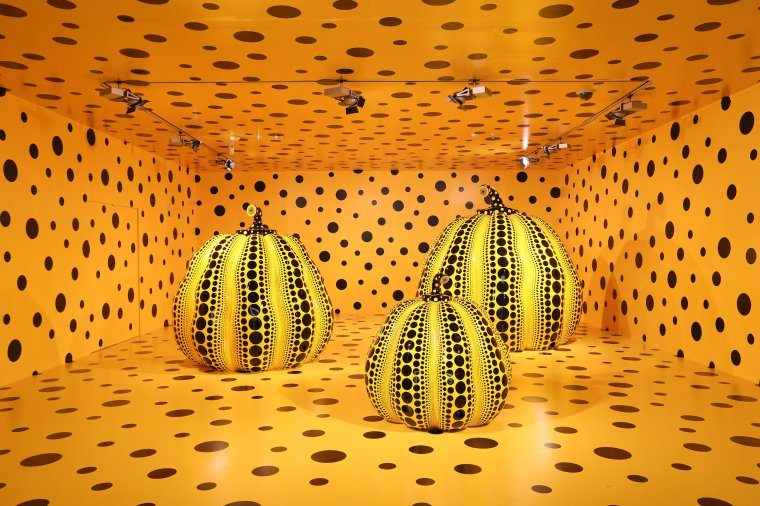 In celebration of Yayoi Kusama opening her own museum in Tokyo, here’s an interview we did with her in 2013.

You travelled alone to New York in 1957. It was almost unheard of for a young Japanese woman to do that in those days. What gave you the confidence to believe that you could make it as an artist in a country you knew so little about?

I kept trying to escape from old restraints and really wanted to leave Japan. My first exhibition in Seattle had a wonderful reception and then in New York, I painted white Infinity Nets and this series was highly admired by many art critics.

You suffered greatly in those early days, often on the brink of starvation. Do you think there are artists today that still have this same determination?

No, I don’t think so. There are many people who have enjoyed flourishing careers however; they stopped producing artworks as they couldn’t dedicate themselves purely to art.

Do you think some kind of suffering is necessary to make great art?

My life philosophy as an artist has never changed.

Only those artists who continue with their art and struggle with all their strength through adversity, can remain active in art world.

TV and the mass media have featured me and introduced my art internationally and many artists have followed me. However, the artist who has little creativity cannot be active for so long.

Many people were committed to revolutions in art. I believe I am one of them, and might be evaluated as such. I think those real artists, including me, try to make a new world.

Georgia O’Keeffe advised you, “take your pictures under your arm and show them to anyone you think may be interested.” The world has changed so much, with new technologies and the Internet dominating our lives. What would your advice to a new artist be?

Ms. O’Keeffe looked at my art and helped me greatly.

I would advise a new artist that: “Art is everything for an artist.”

I pursue art activity with all my energy all the time. I would like to heighten my own creativity and to keep producing the best possible art.

There are consistent themes in your work such as pumpkins and polka dots but you have covered an incredible amount of ground as an artist. The point that when you returned to New York in 1989 you were shocked by the complacency of artists such as Warhol and Lichtenstein who carried on doing the same thing for forty years. Do you make a self-conscious effort to break new ground? How do ideas come to you?

I live a life that is filled with spiritual elevation. I will keep creating art works every day so as to sustain to my way of life as an artist, love and peace.

You hated your formal Nihonga training, the Japanese labeled you a ‘national disgrace’ in the sixties, and you still describe the art scene in Japan as ‘ideologically impoverished’. Your genre is international rather than oriental. Do you feel you owe anything to your Japanese heritage – even just the pebbles in the stream you used to play with as a child?

Certainly I was born in Japan, but I have held my exhibitions in western museums and staged Happenings all over the world. Fortunately, many people supported me. I think I’m not influenced by Japanese culture and tradition. With my creativity flowing from my heart, I have resisted the old convention and pursued my art.

You have clearly kept all your press clippings and they are fascinating illustrations of your success in your autobiography. It’s also very interesting when you describe how Cornell said he never read his, but one day you found a whole pile of them hidden in a cupboard! Do you think it’s important for an artist to read what people say about their work? Did it ever influence you to work differently?

I’m deeply grateful to the people who appreciate my art thus far. However, I haven’t been influenced by people’s comments. I’ve looked at my own attitude towards art daily. I sincerely wish everyone to know that I have used art as my weapon in my struggles with life; my art is my life philosophy.

You have lived in a psychiatric hospital for many years and art has been your therapy. Your psychiatric problems have been a major force in the creation of your art. Would you still say that you have had a happy life overall? Is happiness important to you?

I feel happiness when I can make a nice work. Happiness is something you always pursue. Through contacting true human nature, I’ve been trying to pursue peace and love, which I’ve longed for since my childhood.

I would like to dedicate my life to people who are moved by my works.

You created your own fashion line in 1968 that sold in 400 stores in America. Now you have worked with Louis Vuitton on a collection. Your fashion in the sixties had something really radical to say about sexual liberation. Do you think fashion still has something radical to say?

Yes, I think so. Through fashion as well, I’m trying to express my message “Love Forever” towards the whole world and universe. As a preparation for the after life, I’m trying ever harder to continue to produce better art works.